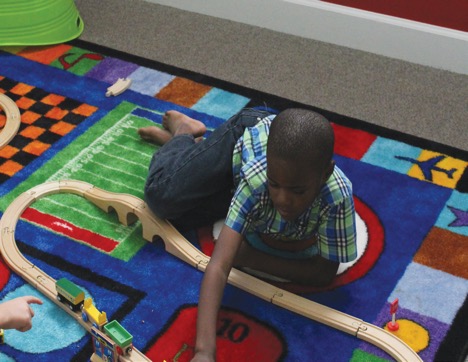 Just a few blocks off the Black Warrior River in downtown Tuscaloosa, Alabama, a new playground, complete with a basketball court, a tire swing and things to climb, among others, sits unmoving. School has been in session for a little more than a month, and it is that time in September when the weather is just barely starting to cool down in the South. Essentially, this setting is ideal for a child with some pent-up energy from a long day at school. But, the students for whom this playground was created are not on the monkey bars, swings, teeter-totter, or any part of the playground, for that matter. Instead, they’re off to the side, sitting crosslegged near the boundary line of their new basketball court, not talking. Why aren’t they running around and playing, or at the very least, chatting? One word: doughnuts.

Inside the nearby building, which houses many of their peers, the scene is different. There are so many activities going on simultaneously. Down the hall from the main foyer, an elementary schooler ducks under a sensei’s jabbing glove, his face in glee all the while. This kid is into it, but the sensei actively engages the students who were not. He says to the class, “I tell all my groups I don’t have pacifiers and milk — y’all gotta pay attention.”

Upstairs, students draw pictures as a sensory outlet. Some are energetic; some are focused; but, all are respectful. Throughout the rest of this refurbished home in which they spend their time after school, there’s laughter, chatter and a general feeling of community, and the best part is that it will all happen again the next day.

On any given Monday through Thursday afternoon during the school year between 3:30 and

Activities such as art lessons, Lego-building and karate allow the students to decompress from school. They also serve to improve sensory integration, as most students with autism struggle with those functions.

There is a separate, smaller program called Learning is Fundamental for Education and Employment that serves students who have graduated from high school. In LIFEE, participants learn vocational skills and participate in supervised employment in the community.

What began as a pilot program in 2004 with six students has now grown to a full-fledged operation serving over 85 children. Jan Sikes, a founder and director of Arts ‘N Autism, fielded concerns from parents about childcare while working as a special education teacher at a Tuscaloosa city school in the 90s and early 2000s.

“Parents would often come in to [Individualized Education Program] meetings or after school … and just say how they felt so bad that their child wasn’t getting to do things their siblings were getting to do, or they wished they had childcare,” Sikes said.

The need for an after-school program for this population was obvious — the standard programs were not meeting the needs of children with autism. Sikes said that their students have “unique behavioral needs” that prevent them from participating in mainstream after-school programs. Some of them tend to wander off, for example, and many are allergic to foods and environmental allergens that must be closely monitored. Typical programs do not usually regulate these things as well as is necessary to ensure the safety and wellbeing of a student with autism.

Josh Lane, a senior majoring in psychology at The University of Alabama and an Arts ‘N Autism staff member, said the program provides structure not just for the child but also for the entire family.

“They can have a life that works better for them,” Lane said. “If the parents aren’t able to have a full-time job that’s 9-5, then the kids aren’t going to have the structure they need from their parents, because the parents can’t provide as much. So, it all centers around that.”

One such parent is Alperlonia Wilson, who has an 8-yearold son in the program. Wilson, who is also the office manager, said the program provides the children with a lot of support. The activities scheduled are engineered to help with specific problems a student might be having such as sensory or behavioral issues. “I miss [the students] when they’re not here, [because] I believe a lot in empathy,” Wilson said. “Once you put yourself in their position and you try to understand what it’s like, it opens you up to explore their personality and just have a good time.”

People from various walks of life fill the roles necessary to make the operation succeed. A sensei gives of his time, encouraging each and every student whose class participates in karate lessons there. Certain LIFEE program participants are employed there and perform needed tasks around the building. Parents help out by running errands and working at fundraisers that Arts ‘N Autism holds. Students from the university make time in their busy schedules to serve as mentors to the kids. No two roles are exactly alike.

Mae Crumbley, a sophomore Honors student majoring in biology at the university, volunteers alongside Lane on Monday afternoons. She helps out in the same classroom each week by providing the teacher with support and by interacting with the kids on a one-on-one basis. She started serving there at the beginning of the fall semester of her freshman year and hasn’t looked back.

“Honestly, first semester, I was trying to transition into college, and I had a good time, but I was really lacking [since I only saw] kids the same age, so getting to come volunteer with the little ones … it’s the happy part of my week where I get to hang out and see how they’re doing,” Crumbley said. “I tried out some different volunteer programs through the Honors College, and I think this is a really neat component in Tuscaloosa.” Crumbley said her time volunteering is academically stimulating, as well, as she is a pre-med student considering a career in pediatrics.

“You get to see how they do certain things, like this [one] kid’s really good at building helicopters — you’d be amazed. They’re so much better than I am at Legos,” Crumbley said. “You get to see that interplay of the interactions between the different kids and how they interact with us. You really get that sustained interaction, rather than just going every now and then, [so] building those relationships has been really cool.”

Crumbley helps in Lauren Ellis’ classroom. Ellis, a full-time teacher, said that volunteers are essential to the proper functioning of the program. Without them, students would not receive nearly as much individualized instruction.

“In my classroom, [the volunteers] work so hard — some of them come in early, and they help me sit with the early arrivals, and they help me prepare lessons,” Ellis said. “They’re a huge, huge asset and a valued part of our daily life.”

Not all volunteers are university students.   Some got involved through other avenues. Eunie Park, a graduate of UA with a psychology degree, is invested because of personal experience — she was not diagnosed with autism until age 25, so working with this population is special for her. She previously worked at a children’s center in the autism unit, but, when funding was cut, she decided to volunteer at Arts ‘N Autism.

“My parents weren’t given this opportunity. This wasn’t out there,” Park said. “I want to serve as an advocate — I know how these kids feel, and I remember. This is a wonderful program.”

Some volunteers progress to paid positions, though these are not easy to come by. Personnel decisions are integral to the proper function of the program, so, almost always, paid positions are only offered to volunteers. Alex Morgan, a junior UA Honors student majoring in social work, met the criteria for a staff spot: worked well with kids and stood out as a volunteer.

Morgan began volunteering at Arts ‘N Autism during the second semester of her freshman year because a class required volunteer work, but she loved it so much that she stayed. Now, she teaches a Legos class and is a teacher’s assistant during the rest of her time there. Morgan said that her experience added a new dynamic to her future career plans. She hopes to go into child protective services first, which will include interaction with children with autism. Any interaction she has with children will be useful.

“After that, I’m also thinking of doing social work at a school for children with specials needs; I didn’t have any inclination of working in a school before I started interacting with these kids,” Morgan said.

Students at Arts ‘N Autism said they liked a lot of activities they did there. Many of them echoed the same sentiment — they liked playing outside on the playground. Isaiah, a second-grader, said the adults there “teached [him] how to draw and play music.” The workers and volunteers attempted to provide an atmosphere for students to thrive in. If they did so, they had done their job; it’s all about the kids.

“During the year and a half that I’ve been here, I’ve seen so many of them grow so much and get better and try new things, which is always a big deal for all of them,” Morgan said. “One of the little girls here — she didn’t used to speak — and during the time that I’ve been here, she started to speak, so that was really, really cool. We’ve got all kinds of fun people. This place is just full of happiness.” Once you put yourself in their position and you try to understand what it’s like, it opens you up to explore their personality and just have a good time. 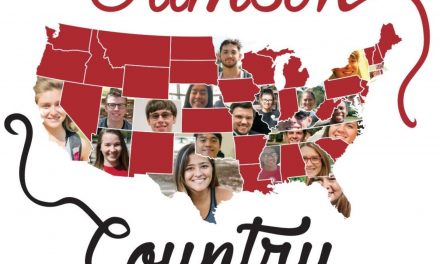 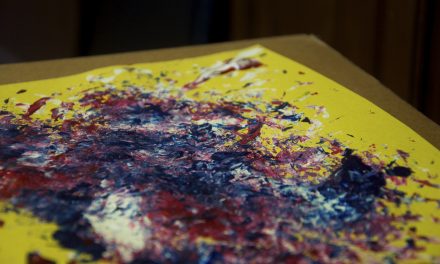 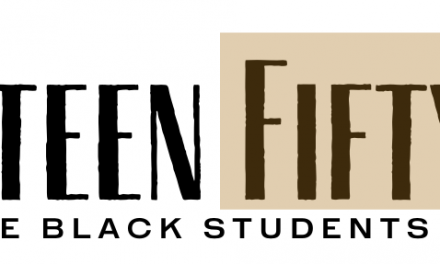