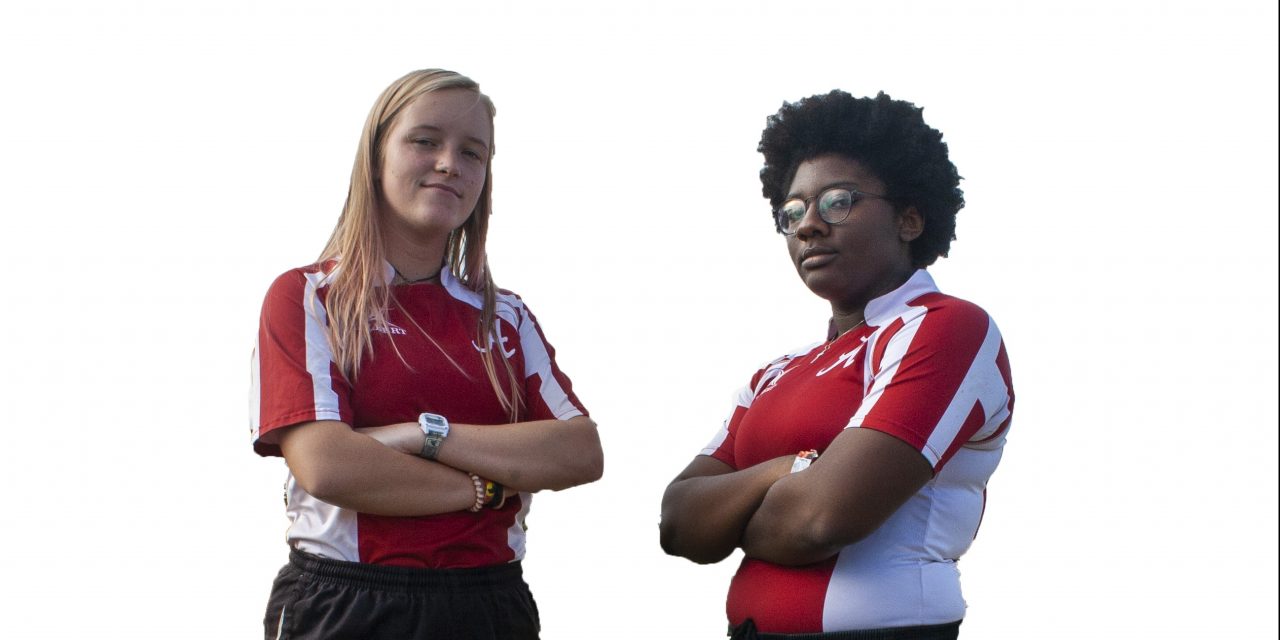 More than a club: A look into the women’s rugby team on campus

When Michelle Moore went to Get on Board Day as a sophomore, the thought of joining the Women’s Rugby Club hadn’t even crossed her mind. She was on her way to another club’s table when she passed the rugby team and a girl got right in front of her, asking if she wanted to play rugby. When the girl wouldn’t take Moore’s “no” for an answer, she signed up for the email list, thinking that would be the end of it. A week later she received an email detailing when and where the first practice would be.

“I read the email and I was sitting in my room, and I was like, why not? Let’s just try it. Let’s just see what it’s about,” Moore said with a laugh as she recalled the moment. “Two hours later at the end of practice, I was like ‘I don’t quite know if I like it yet,’ so then I came back again and that was that.”

A year later, Moore is still on the team and loving it.

Unlike Moore, sophomore Honors student Taurrya Owens, who goes by T, specifically sought out the team by looking on The Source. With a background in softball and basketball, she’d always been interested in rugby but never had a chance to play it in high school.

“I emailed them and they were like ‘hey, we have practice,’ and I came out to a practice and got tackled. It was a wrap from there,” Owens said.

While she loves the physicality of the sport, Owens also appreciates the bonds she’s made with her teammates. Coming from a small town in Georgia with a graduating class of 42 to a large university, rugby was the perfect solution for making the transition less daunting. Describing the team as pure family, Owens, who currently serves as vice president of the team said, “Once I joined rugby and found these amazing people that want to get to know me and wanted to be my friend and to hang out with me, which I honestly had never really had in my life, I was like ‘I want to be a part of this forever.’”

Carrie Kukelhan, a current graduate student who joined the team as a sophomore, described something similar when asked about the culture.

“We hang out all the time outside of practice and we just really try to be there for each other, whether it’s rugby related or if somebody needs help with anything going on in their life,” she said.

But aside from the friends she’s made, Kukelhan enjoys the traveling aspect of being on the team. Since the club plays teams from surrounding states, they get to travel to different cities and see different campuses, including Tulane University in New Orleans.

As far as advice for those interested in rugby, Kukelhan, who barely knew what the sport was before playing, said, “Don’t be scared to try it out because that was one reason I was a little tentative at first. But you [have to] at least go out and give it your best shot – and if it’s not for you, it’s not for you. But if you’re interested at all, I would definitely recommend it.”

Casli Waugh, who serves as one of four captions on the team, was also someone who came in with no rugby experience when she joined the team spring semester of her freshman year. And even as a senior, she’s constantly learning new things about the sport, which is actually one of her favorite things about it.

“I’ve never fallen in love with a sport like I have this one,” Waugh said, who played every sport her hometown had to offer. “Just playing this, it’s so exhilarating and like I said I’m still learning things. I think that’s what the cool thing is.”

So whether you’ve never heard of the sport or if you have some interest, the rugby team wants you all the same. According to junior Rachel Niemira, the head of recruitment, almost everyone on the team comes in without prior rugby knowledge. What drew Niemira in was finding a sense of purpose.

Not only have team members found a sport that they love, but they’ve also found their friends and a place to belong on campus.